This you need to know: what to do if you are bitten by a snake

In our areas live several types of snakes, which three are poisonous, while others are harmless.

How to recognize wound – in place of the wound can be seen two holes of snake teeth. Sometimes there is only one. Is not necessarily means that the snake in the wound left and poison. In only 22 percent of proven wounds there were no signs of poisoning. 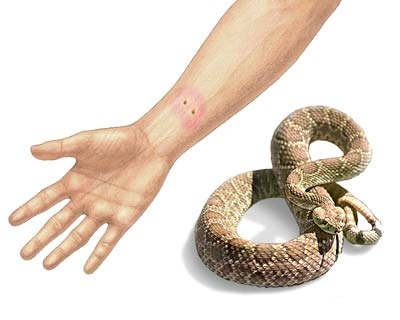 – Pain at the place of the wound

– Shock is the most dangerous consequence

– A person should should be still

– Immobilize the leg or hand on which is wound. Thus slowing the expansion of the poison in the body

– Requires a quick transport to hospital

Immobilization is a procedure by which the wounded part of the body is placed in the condition of the Standby. Within the ambulance is implemented temporary immobilization. Its purpose is to prevent deterioration of the infringement and to reduce the pain during the transport to the hospital.

In a situation of standby is placed the wounded arm or leg and two adjacent joints. The leg is immobilized in a vertical position, and the hand should be wrapped in the elbow and proximate to the body.

The most common mistakes that you should not do:

– Do not bandage the limb

– Do not touch the wound

– Do not attempt to remove the poison

– Do not put ice on the wound site

Prevention – Some wounds, such as those that accidentally step on the snake is almost impossible to prevent. However, there are precautions that can significantly reduce the possibility to be bitten by a snake.

– Leave the snake alone. Many people when are bitten, they are trying to harm the snake

– Avoid tall grass unless you have the proper clothes

– Hands and feet do not put in non-visible places

– Do not lift rocks or pieces of wood if you are not a far enough from potential snake attack. Be especially careful if you climb on rocks.